A Meditation on the "Ebony Disciple": Martin, Memphis, and Memory 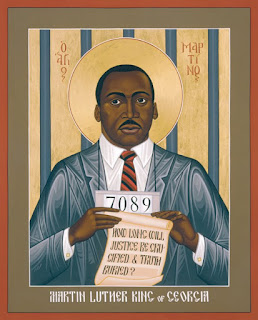 Today is the 40th anniversary of MLK's assassination in Memphis, Tennessee.

I haven't really spent time canvassing the Internet in search of stories, but Ed Gilbreath offers his usual insightful commentary about contemporary affairs--in this case MLK--here.

A few weeks back I began to make my way through Michael Eric Dyson's latest book: April 4, 1968: Martin Luther King, Jr.'s, Death and How it Changed America. Dyson will discuss this book on C-SPAN2's Book TV live on Sunday, April 6.

Dyson examines the end of King's life, offers a literary analysis of his sermons, and discusses black America 40 years after King's death. Dyson also address black leadership in the wake of King's death, with chapters on Jesse Jackson, Al Sharpton, and Barack Obama--and most interesting of all takes creative license to write an Afterword titled "Interview with Dr. King on His 80th Birthday." It is the most intriguing part of the book. [UPDATE: Ed Gilbreath informs me that this interview is available over at The Root.]
Here’s a memorable King quote, whom Dyson calls Jesus’s “ebony disciple,” full of prophetic insight and admonishing encouragement: “I wish today, that Christians would stop talking so much about religion, and start doing something about it, and we would have a much better world. But the problem is that the church has sanctioned every evil in the world. Whether it’s racism, or whether it’s the evils of monopoly-capitalism, or whether it’s the evils of militarism. And this is why these things continue to exist in the world today” (pp. 126-27).

Thanks for the heads-up on Dr. Dyson's appearance on Book TV this coming Sunday. I'll be sure to check it out. I've seen quite a few really great interviews there from time to time.

I'm glad to see more input from you here lately. I wish the same could be said of me on my own site.

I'm glad to be posting more, too! Any thoughts on the Dyson appearance? Still watching it, and may post something later on.

Look forward to reading your posts when you get back to it.