Spending the Holidays with Horne, Part 2: Interview with Gerald Horne

I begin 2010 with part 2--the final segment--of my interview with Gerald Horne.
Baldblogger (BB): Your first scholarly work—Black and Red: W.E.B. Du Bois and the Afro-American Response to the Cold War, 1944-1963 (1986)—tackled Du Bois, and now over twenty years later you return to research and write another book on Du Bois (let us not forget, however, W.E.B. Du Bois: An Encyclopedia (2001), co-edited with Mary Young). First, how has Du Bois historiography changed during the last quarter century, and what are some fruitful avenues of research currently under investigation? Second, how was researching and writing W.E.B. Du Bois: A Biography similar and different than your first work on Du Bois?

Gerald Horne (GH): With the collapse of the USSR and the formal end of the Cold War, it is possible to be more sober and objective in understanding these phenomena today--as opposed to the 1980s when Black & Red was being evaluated. Having said that, I think we need more digging in foreign archives about Du Bois; for example, archives of German intelligence concerning his student years there; British, French and Portuguese archives concerning the 'Pan African Congresses'; Moscow archives concerning the Communists' approach to him--ditto for Beijing.

Suffice it to say that I wrote the first book on a typewriter--the second on a laptop: enough said.

BB: I thought long and hard, and could not identify another scholar who penned separate biographies of spouses. How did researching and writing about Du Bois and his second wife, Shirley Graham Du Bois in Race Woman: The Lives of Shirley Graham Du Bois (2000), shape your understanding of the Du Boises in particular, and twentieth century history more generally? What are the difficulties and delights of working on such spousal biographies?

GH: As so often happens in marriages, one spouse influences another--so having written a biography of Shirley Du Bois aided in writing the book under discussion: and vice versa.

To be candid, I cannot think of any "delight" involved. Generally, I find research to be delightful--and writing to be hard work.

Perhaps when I was writing the book at hand, I was conscious of not being repetitive--in terms of both themes and phrases--in terms of writing earlier Du Bois books. 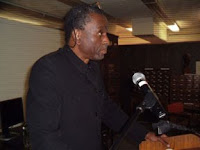 BB: You are perhaps the world’s nimblest archive-hopper. What archives did you visit in preparing your Du Bois volume? What archives might you suggest to individuals interested in researching Du Bois and his life and times?

GH: Fortunately, Du Bois' Papers are on microfilm and, thus, easily accessible [BB: in a few years, the Du Bois Papers will be digitized and thus available for a wider audience]; some of his richest letters have been published under the aegis of Herbert Aptheker, who also prepared a comprehensive and annotated bibliography of Du Bois' work. Then there is my Du Bois Encyclopedia--all these, and other sources, were instrumental in penning this book.

As for archives, see the response above. I would particularly like to draw attention to the archives in Lisbon, Portugal, which are quite rich and which I used for my book, The Deepest South on the African Slave Trade (2007). As is well known, Lisbon not only once controlled Brazil--a 21st century superpower in the making--but, as well, Mozambique and Angola, homelands of numerous 'African-Americans'. Those interested in the struggle against apartheid would be derelict if the Lisbon archives--particularly at the Foreign Ministry--are ignored. Being a small power--today's population is only about 9 million--with a huge African 'empire', Lisbon was deathly paranoid (understandably) about anti-racism and anti-colonialism, particularly emerging from their often articulate backer: the U.S.

BB: By my count you have authored around 25 books, with additional edited volumes. As you look back on a distinguished career as a scholar, activist, lawyer, and writer, what are the best things about writing? The most difficult? For those unfamiliar, what is your process for researching and writing a book or an article?

GH: The best thing about writing, I think, is creating a record for future generations to consider; then there is the creative process of conjuring up the appropriate words and images to move a reader. The most difficult? Hard to say. Having been writing a book continuously since August--which I just finished last week--I would say the most difficult thing was the time spent away from reading, from writing op-eds and commenting on the flashing issues of the moment, writing book reviews, etc.--I have felt this tremulously and tremendously.

I have just started two new books: one on the relation between Black America and Cuba before 1959, the other, a biography of the Black Communist, William Patterson. The latter will not be that difficult to research, his papers are at Howard, I visit there in a few days, I know where the 'bodies are buried', so to speak, having written about his comrades e.g. Du Bois, Ben Davis, Ferdinand Smith, et.al. The former is more involved, more complicated, requires *much* more digging. I have some themes in mind but others will emerge as I dig in; for example, yesterday I was reading an English language newspaper from Havana beginning in 1912 and what jumped out at me was the concern about Japanese encroachment in the hemisphere, so I guess that will be a theme since Tokyo simultaneously was making appeals to Black America. So, I go into this project with settled themes--solidarity between Cuba and Black America; 'racial' bonding particularly in music and sports; hysteria about radicalism on the part of their mutual antagonists; etc.--and I look for bolstering of these themes as I research; then other themes emerge--e.g. Japan-as I dig further.


BB: The cover of W.E.B. Du Bois: A Biography features a very courtly 1946 photograph of Du Bois with a penetrating gaze. What did you wish to communicate with this choice for the book’s cover?

GH: I confess: the publisher chose this photo.


BB: What material you have to leave out of W.E.B. Du Bois: A Biography? Put another way, what are certain points about Du Bois’s life you wished to have emphasized more?

GH: Perhaps I could have emphasized more his private life, his personal life--but choices must be made.


BB: What projects are currently in the works? You cite Negroes with Guns!: African-Americans and the British Empire Confront the United States before the Civil War as forthcoming in the footnotes; what can inquiring readers expect to see in the future?

GH: Reds in Paradise? Racism & Radicalism in the Making of Modern Hawaii is in press with the University of Hawaii Press. It tells the complex story of how an archipelago thousands of miles from the mainland became the 50th--and final?--state while the Communist Party and a union close to it played a leading role in these lovely isles. I have noticed that the hyper-active conservative movement in this nation already have perked up their ears at the prospect of this book, even though their ostensible target--Barack Obama--was born in 1961, two years after my narrative concludes! [BB: Regarding Barack Obama, Hawaii, and the Communist Party (among other important topics), readers may be interested to check out Horne's weighty, informative, and fantastic speech at the opening of the CPUSA (Communist Party, U.S.A.) archive in 2007, and in the previously cited interview about his recent book on US-East Africa relations.]

Negroes with Guns! is a de facto sequel to the work of Benjamin Quarles and also that of Simon Schama's Rough Crossings in that it discusses at length the unavoidable fact that the Africans in North America did not see the 1776 revolt as legitimate, saw it as a revolt against the proto-abolitionist 'Somerset's Case' and, thereafter, collaborated with London (particularly in the War of 1812 but also in contesting control of Florida, Texas, the Pacific Northwest, etc.) This conflict was resolved only with the Civil War--and abolition.
Posted by Phil at 10:41 PM