MLK Day: A King for Our Times

I posted this two years ago on MLK day, and I now post it again. We still need a King for our times. 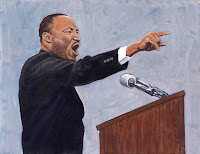