I've been pouring through W.E.B. Du Bois's FBI files for my current writing project, and so Mark Anthony Neal's post about John Hope Franklin caught my eye. Talking Points Memo Muckraker discussed federal vetting for one of Dr. Franklin's appointments in the 1960s, and it also appears that J. Edgar Hoover--modeling the U.S. government's surveillance of Black Americans particularly during the Cold War period--examined some of Franklin's "ties" to communism. 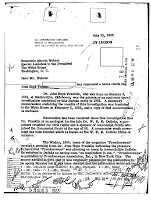 It is now well acknowledged, of course, thanks to the work of scholars such as Robin D.G. Kelley, Gerald Horne, Brenda Plummer, and Mary Dudziak, that the demise of Jim Crow in the mid-twentieth century came via Black America's long-standing ties to the Communist Party, and the losing propaganda battle the U.S. tried to fight in the 1940s, 1950s, and 1960s as Moscow pointed out the U.S. anti-democratic practices at home while claiming to fight for democracy abroad.

Of particular interest in reading the file--excerpted here by TPM Muckraker--is the commentary about Dr. Franklin's praise for Du Bois's life, work, scholarship, and activism the year following Du Bois's death. Franklin said: "Dr. Du Bois has been an inspiration to me and to most members of my generation. ... His impeccable scholarship, his fearlessness as a leader,and his determination to secure freedom for all peoples, were the hallmarks of his great and illustrious life."

About Du Bois's 1951 arrest and trial, Franklin recollected: "I wish I could eradicate from my memory the picture of Dr. Du Bois, handcuffed like some common thief, accused at eighty years of age of being the agent of a foreign power. Even his later exoneration cannot obliterate from my mind the impression that, perhaps he was the victim not merely of the fanatacism that characterized those years, but that he was being punished for what he had represented for more than half a century."
Posted by Phil at 11:08 AM