Spending the Holidays with Horne, Part 1: Interview with Gerald Horne 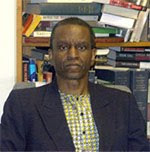 The next interview at Baldblogger--which comes in two installments--features an extended conversation with University of Houston historian Gerald Horne about his latest book, W.E.B. Du Bois: A Biography (2009).

In addition to his professorial duties at UH, Horne is a regular writer and commentator at Political Affairs. One may find him on-line with the "The Blackberry Interview" as well as an interview about his book on connections between East Africa and the United States Mau Mau in Harlem?: The U.S. and the Liberation of Kenya (Palgrave Macmillan, 2009). Other resources include a 2002 video lecture on reparations for African Americans. Horne also appears on YouTube, in a 3-part presentation from The Long Civil Rights Movement conference in April 2009.

In this interview Horne discusses his extensive research on Du Bois, important and salient points about W.E.B. Du Bois: A Biography, working in the archives, and books he is currently writing.

Baldblogger (BB): There are a number of biographies on Du Bois currently available—namely the early works of Elliott Rudwick and Francis Broderick from the 1950s and 1960s, David Levering Lewis’s Pulitzer Prize winning 2-volume study, published in 1993 and 2000, respectively (now available in a condensed one volume offering), Manning Marable’s readable W.E.B. Du Bois: Black Radical Democrat (1986), and Edward Blum’s W.E.B. Du Bois: American Prophet (2007), among many others. Put simply, why the need for another biography on William Edward Burghardt Du Bois?

Gerald Horne (GH): Good question: I would say that my biography has a particular interpretation of Du Bois' life, previously unavailable. I would also add that the political experiences I have had are congruent with those of Du Bois, giving this particular biography a notable resonance, also unavailable elsewhere.


BB: Several distinguishing marks about your Du Bois biography merit mention. One is that you situate Du Bois’s life and times in an international context—relating his assaults on white supremacy at home to the color line that belted the world (to use the title of a 1906 Du Bois article). You also spend considerable time discussing the last two decades of his life (particularly chapters 10-12)—an important period that has received little scholarly attention. Moreover, you open the book’s introduction with the story of Du Bois’s 1951 arrest—not an insignificant place to begin the biography. On a related note you state in at least two places in the book that Du Bois became more politically radical with age, whereas conventional wisdom suggests that individuals tend in a more conservative direction as they advance in years (pp. 104, 163). I wonder if you might elaborate on these important features of your book?

GH: There is a saying, as you well know, that "all politics is local" and that we should "think globally, act locally." If you meld these two aphorisms you arrive at the point that in order to comprehend the ostensibly domestic--e.g. a man, Du Bois, born in the U.S.--one must understand the entire context (including the global context) that enveloped him. It is now well-established that a signal reason why Jim Crow began to crumble when it did--i.e. in the 1950s--has everything to do with the Cold War and the difficulty the U.S. had in presenting itself as a paragon of human rights virtue in the ongoing conflict with Moscow, as long as it was enmeshed itself in horrific human rights violations. The trade-off, little recognized--I'm afraid--is that in exchange for civil rights concessions, those of the left (e.g. Du Bois) had to be further marginalized. In other words, seeking to understand Du Bois' life without understanding the entire context in which he operated (including the global) would be quite short-sighted.

Opening the book in 1951 highlights this point--i.e. this was arguably the low point of his life: being arrested. But he was arrested not because of a moral failing, I would argue, but due to a changing political scene. I think that the nation was moving to the right, as Du Bois' life proceeded---then the nation made the extraordinary leap of moving to the right as civil rights were expanded. Du Bois could have accepted this civil rights bargain, as so many others did, but refused. As I argued in my book, Black & Red, these salient points are best illustrated in the last decades of his life--arguably the most important of his important life.


BB: A related question concerning Du Bois's twilight of years: for those so interested, what are some of the most important of Du Bois's writings, circa 1934-1963, you would direct readers to and why?

GH: Black Reconstruction, of course, is yet to be surpassed in explicating a critical era. In Battle for Peace--indispensable in understanding the question posed above. His Autobiography too is indispensable in the latter regard. [BB: The latest critical edition of Du Bois's writing--published under the editorship of Henry Louis Gates, Jr., and a series to which Horne contributes--came out in 2007 with Oxford University Press. Equally indispensable is the 35-volume collection of Du Bois's works compiled and edited by Du Bois's comrade and the indefatigable Marxist historian Herbert Aptheker.]

BB: Relative to Du Bois’s work with the NAACP, you note his role as editor of The Crisis, the NAACP’s official magazine. It seems to me that the early issues of Crisis—under Du Bois’s editorship from 1910-1934—presents the interested scholar with a virtually untapped archive of early twentieth-century history. You write that, along with Du Bois’s earlier journalistic efforts in Moon and The Horizon, Du Bois sought both to assault white supremacy and inform readers about Africa, among other aims. Can you comment more about Du Bois and his work in/on The Crisis?


GH: The Crisis remains unsurpassed to this day. Without being invidious, compare this journal to its current iteration and you will find that it is not easy being radical--as Du Bois' iteration surely was--even today when the price to be paid is not as high as it was in 1910. Compare how Du Bois' version handled global matters with today's, where this weighty matter is largely absent.

BB: In chapter 7, you contextualize Du Bois’s 1924 book The Gift of Black Folk: Negroes in the Making of America, by discussing its publication under the auspices of the Knights of Columbus, a Catholic outfit. You rightly point out that Du Bois roundly criticized the church’s support of white supremacy and segregation. While this is the only place in W.E.B. Du Bois: A Biography you address religion, I wonder if you might assess the surging scholarly interest in Du Bois and religion?

GH: Religion has been huge in the Black American Experience and it is only natural that this interest seeps into a consideration of an important figure e.g. Du Bois.
Posted by Phil at 4:35 PM

Thanks, Celucien. Glad you liked the interview. Part 2 coming soon.

Enjoy reading your blog as well. Planning to post some more on your graduate work? Dissertation/research looks fascinating.

Thank you for providing such valuable information. We would like to share with you some information about Online Webcam Test. Online tools like this are highly beneficial. If you have any questions, please contact us.