Spending the Summer with Du Bois, Again, Part I 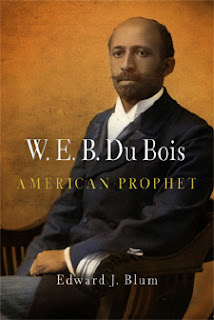 It has been a calendar year since the release of Edward J. Blum's W.E.B. Du Bois, American Prophet.

Within that time, Blum's book was nominated for a Pulitzer Prize, a Grawemeyer Award in Religion, and received Honorable Mention last December at the Gustavus Myers Center Outstanding Book Awards. (His first book also received honorable mention from the Gustavus Myers Center.) Blum also lectured on Du Bois at Rice University, the University of Houston, Morehouse College, University of Rochester, the University of Chicago, and UC-Riverside, among other venues. Blum also presented a paper on Du Bois at the American Historical Association annual meeting in Washington, D.C.

He’s continued to publish on Du Bois, with reflections in the journals Fides et Historia (Winter/Spring 2008) and The Journal of Blacks in Higher Education (Autumn 2007). He’s been interviewed on 3 blogs about Du Bois (interviews here, here, and a 7-part interview: Part 1, Part 2, Part 3, Part 4, Part 5, Part 6, Part 7, consulted about contemporary matters of race and religion with Newsweek, and of course the scholarly reviews are starting to pour in: JAH, AHR, Progressive Historians, Fides et Historia, H-AmStdy, Church History, and Christian Century, among others. Blum also has edited a collection of essays on Du Bois and religion, due out next year with Mercer University Press.

Given the attention Du Bois has received on this blog, I thought it would be fun, interesting, and intriguing to conduct a follow up interview with Ed Blum. Thanks Ed, yet again, for your time.
This is the first of two posts.
***********************
Baldblogger (BB): It sounds like it has been a whirlwind year, but also a time of considerable attention to the understudied and overlooked aspects of Du Bois and religion. With regard to this, can you briefly summarize your thoughts on the year?

Ed Blum (EB): It has been a crazy year; I spent so much time reading on airplanes that I started blogging with recommendations for air travel. Just about everywhere, the audiences have been tremendous. At Rochester, a young Buddhist student immediately went off and searched for poetry by Du Bois and Langston Hughes about religion; at Houston, several students wanted to know so much more about race and religion that they trekked over to the library to get my book and others. It’s been a fun time, and I’ve been so honored by the attention to the book. It confirms what I knew was the case: that if we opened ourselves to Du Bois’s religious teachings, we would learn so much, have new questions and insights, and feel like we understood our spiritual, sacred, and religious worlds better.

BB: As you look back on the laborious period of researching and writing W.E.B. Du Bois, American Prophet, and now a year after its publication, what is most gratifying for you?

EB: Most gratifying has been the notes I’ve received from random individuals who talk about how their minister mentioned the book or that they heard Cornel West talk about it on Tavis Smiley. These folks usually write to say just how much Du Bois has helped them at this moment spiritually, especially with all that has happened with Barack Obama, Reverend Jeremiah Wright, Hilary Clinton, and the politics of the moment. It has been so gratifying to know that my work on Du Bois has helped some people make sense of this trying time and as we try so desperately to believe in hope.

BB: In a recent interview, you discussed the audiences for whom you wrote. Scholars and researchers will read the reviews in academic journals, so I wonder if you can give us a glimpse (to the extent that you can) into the reception W.E.B. Du Bois, American Prophet has received by popular audiences?

EB: It is apparent to me that a number of ministers have either mentioned the book during their Sunday sermons or in church bulletins, because I’ve received a bunch of email where the individual referenced their minister or church. Also, a number of people wrote to me after reading about the book on a blog. It’s been fun to interact with moms and dads, with church elders and high school seniors – all whom seem touched and moved by the book. 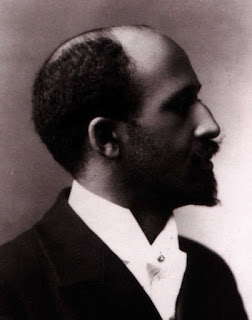 BB: If you had to choose, what is your favorite chapter in the book? Why? Is there a chapter you’d like to rewrite? If so, why?

EB: My favorite chapter by far is the fourth chapter on Du Bois’s approach to violence, religion, and the story of Jesus Christ. I think it is so hard to come to religious grips with the levels of human violence in this world, especially when we consider racial violence. Du Bois’s ability to weave together the story of Jesus with that of embattled African Americans I find so inspiring on so many levels. I also think that is the chapter that is written the most elegantly.

But chapter 4 is also the one that I would change. It is too long, I think, and probably should have been divided into two separate chapters. Thank goodness that there are section breaks!

BB: In a previous interview you discussed some of the material you had to leave out. I wonder if you might elaborate on some of this—perhaps Du Bois’s funeral and the “spiritual love” for his children—and discuss how it would further establish Du Bois as an “American Prophet,” or more clearly unveil Du Bois’s religious selves?

EB: I wish that I had spent more time on Du Bois’s personal life and his religious belief. There, we would have encountered not a perfect individual (he most certainly had marital affairs that he never told his spouse about), but his love for his children seemed rooted in a religious belief. I think we would have found him to be again so similar to older prophets – not perfect, but nonetheless believing that he was speaking holy words.

BB: Regarding the subject of Du Bois and religion, if you could ask him one question, or make a statement to which he’d respond, what would it be? Why?

For some reason, the link to the Church History review is not working. I pasted the URL into the link box at the dashboard, but it doesn't seem to be cooperating.

In any case, readers wishing to read the Church History review simply Google: Lewis V. Baldwin Du Bois Review and it should be the first hit. It will take you to a pdf version of the review.

I too enjoyed chapter 4. I even wrote a post on it.

It is strong. I still relly like chapter 2 as well; Blum's analysis of _Souls_ and its larger context is quite good.

Wonderful interview. I need to purchase this book.