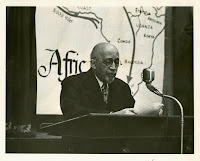 Ch. 3
Blum’s third chapter studies Du Bois as a historian and a sociologist, paying particular attention to the religious dimensions and spiritual interpretations Du Bois offered in works such as The Philadelphia Negro (1899) and John Brown (1909). Blum shows that at the base of Du Bois’s careful social, economic, cultural, and political analyses of black life in the United States rested the deep conviction that white supremacy and its expressions of faith constituted a religious problem, what Blum terms the “spiritual wages of whiteness” (103). For Du Bois, white supremacy was a problem of global significance, chronicled in key works throughout the twentieth century: Darkwater (1920), Color and Democracy: Colonies and Peace (1945), and The World and Africa (1946). Spiritual rage and righteous indignation peppered Du Bois's reflections.

Ch. 4
Further clarifying Du Bois’s conception of white supremacy as a theological concept, chapter four provides careful readings of Du Bois’s creative writing, and the imaginative ways he testified to and about the sacred dimensions of black religious life. In novels, plays, short stories, and reflections that appeared in the NAACP magazine The Crisis, Du Bois reimagined religious life in the United States where black biblical characters assailed and condemned the religion of white supremacy. Blum’s starkly disturbing and jarring accounts of the ritualized dimensions of lynching and the sacred significance whites attached to it, renders the spiritual dimensions of Du Bois’s creative offerings striking—particularly in Crisis articles “The Gospel According to Mary Brown” (1919) and “The Son of God” (1933), short stories in Darkwater, and novels—works Blum discusses alongside similarly creative musings from Langston Hughes and Countee Cullen, for instance, and even Frederick Douglass and David Walker the century previous. Blum perceptively demonstrates how like a Hebrew prophet of old, in his literary work Du Bois located “dramas of redemption” (180) in the midst of suffering, violence, and gross inhumanity, placing black characters at the center of the story as spiritual exemplars and arbiters of redemption; it is here readers may rightly find “the gospel according to W.E.B. Du Bois” (153).
[Photo from UMass Digital Archive]
Posted by Phil at 11:02 AM