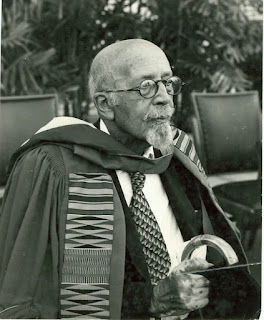 With the first week of classes at many colleges and schools this week, it is only appropriate that the conversation shift to teaching. Not only does Blum's work chart new historiographical territory, it also promises to refashion the pedagogical landscape. Feel free to share your own thoughts on teaching Du Bois or related topics; think of it as an on-line inservice.

Baldblogger (BB): I’d like to shift the discussion from research to teaching. Some may or may not know that you won a teaching award as a graduate student, and your recent profile on History News Network commented about pedagogy. Can you discuss your teaching philosophy? How important is the relationship between a scholar’s research/writing and his/her teaching? Why?

Ed Blum (EB): I see very little different between my teaching and my research. I teach what I research; I research what I teach. I find that students love it in discussions of the reading for a week what I have found in the archives, or what my reading of primary documents says about a topic. For example, when I teach about the nineteenth century, my students find it fascinating that by 1900 there were whites in America who claimed that African Americans did not have “souls.” And then when I remind them about Du Bois’s The Souls of Black Folk you can see a collective ‘ohhh’ moment in the class. That is exhilarating. Also, I feel that if I can articulate my ideas to an undergraduate class, then I can write it for other historians. So I see very little divide between teaching and research.

My teaching philosophy is built around the imagination. I want my students to be able to imagine the past – how it felt, how it smelled, how it looked, what they would have thought. And this process of imagination becomes really complicated when they try to put themselves in the positions of very different people. How did the slave market look to a buyer? How did it look to a slave? How about to a poor white woman outside of New Orleans? Getting students to feel the time and the conflict, that is what is most important to me. For this reason, I use a whole mess of approaches. We use music; we’ll have food; we have debates and historical simulations. I often have my students find their own primary documents (so they go and find any responses to Uncle Tom’s Cabin and see what they think). That’s the fun stuff to me.

The best historical simulation we do is of an abolitionist convention. Students research different abolitionists (like William Lloyd Garrison, the Tappan brothers, Frederick Douglass, Elizabeth Cady Stanton, Lydia Maria Child, Sojourner Truth, etc) and then come to class to form a new organization. At first, everyone agrees about the basics (that slavery is bad; that the South is a problem). But then things get messy. Usually it involves issues of gender – and those who worked on Stanton get infuriated that there is not more attention to women’s rights. Then the issue of violence comes up and no one can agree on anything. By the end, the group is usually ready to divide along various lines, which is pretty much what happened over and over again. The lesson: being a reformer is hard.

BB: Can you provide 1 or 2 examples of this relationship from your own teaching career?

EB: My best experience with students thus far was with two undergraduates at Kean University. For one summer, I had two research assistants – Katherine Kennedy and Danielle LaPorte. We would trek over to Rutgers University, sit down at our respective microfilm machines, and look at everything Du Bois. It was a blast talking with them about what they were finding. They read a few biographies of Du Bois and then printed out anything they found interesting from The Crisis, the journal of the National Association for the Advancement of Colored People that he edited from 1910 to 1934. Watching them “do history” was just so much fun. Their research was so helpful for my book as well.

BB: You are a member of what cultural commentators Generation X (as am I), and while the technological dimensions of our childhood weren’t filled with cell phones and iPods but VCRs, CDs, and slow bulky PCs without and Internet connection (!) education specialists seem to talk incessantly about today’s visual generation—and the importance of visual literacy. Yet other specialists insist that pedagogical processes must also include more “traditional” forms of teaching. In light of these generational dynamics and pedagogical concerns what are some of the most effective strategies for teaching history? Why?

EB: I’m not against the use of technology – of videos or of music in the classroom. If they could make historical video games I would probably use them. So in that sense I’m definitely a part of Generation X. But I also love a good lecture; there are some lecturers – like Leon Litwack or Mark W. Summers – who can hold a crowd spellbound. They don’t need fancy technology; they just have great historical yarns, jokes, and stories that illuminate an era. I guess I try to do both.

BB: How do you teach Du Bois? Did writing W.E.B. Du Bois: American Prophet prompt you to revise how you teach him in any significant way(s)?

EB: When I teach about Du Bois, it is always in the context of other topics, such as slavery or Reconstruction, or white supremacist theology, or the Civil Rights Movement. I typically use Du Bois as an example of the various ways that African Americans resisted oppression. Or I discuss him as an example of how white supremacy affects everything. When Du Bois received his PhD, he was one of the most highly educated and accomplished young academics in the United States; and yet no white university would hire him. Students tend to find that interesting. It is a part of racism that is less abhorrent than something like lynching, but seems to get students where they are at--potential job applicants.

BB: In your experience, how have students responded to Du Bois?

EB: Students have a tough time reading and relating to Du Bois, I have found. They find his prose, especially The Souls of Black Folk and Darkwater to be too Victorian. They often don’t get his allusions – whether to ancient mythologies or Shakespeare. But they do tend to get his religious allusions better than many academics. My students can usually identify that something “comes from the Bible” – they just usually don’t know where.

BB: What are some of the key Du Bois works with which students may begin to engage this important historical thinker?

It depends on what the class is for. If it is an African American history class, then the best work to read of Du Bois’s is Darkwater. It has him at his best and most critical in many ways. If the class is on religion, then his Prayers for Dark People will be lots of fun (and affordable). If the class is on gender and race, then his novel Dark Princess could be very interesting, because it has a messianic union between an African American and an Indian Princess. For a basic US history class, sections of Black Reconstruction are just fantastic, particularly the end about the “propaganda of history.” For world history classes, one could use The World and Africa which was a fantastic primer on world and African history.

[Photo from UMass-Amherst Digital Du Bois archive.]
Posted by Phil at 4:46 AM