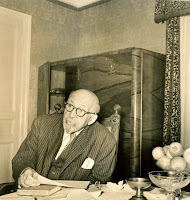 Baldblogger (BB): You devote a whole chapter to Du Bois’s masterful Souls of Black Folk. Briefly, why does this book deserve its own chapter?

Ed Blum (EB:) Souls of Black Folk is such an important work for a variety of reasons. First, it is with that work that Du Bois established himself as a public intellectual. That was the book that catapulted him from a fine scholar to an internationally-renowned scholar. It was reviewed in newspapers and journals throughout the United States and Great Britain, and I found that it had a huge readership. In the hundred years since its publication in 1903, moreover, the book has continued to be read and thought about. [BB: for more on this point, see this book.] Much of my book focuses on how people read and understood Du Bois – so this was a great work for that. It is also the place where Du Bois pioneered a new type of scholarly writing – an interdisciplinary approach, where he mixed history, sociology, personal reflections, poetry, music, and anthropology. Finally, Souls of Black Folk was a perfect example of how scholars had missed the boat by ignoring religion. The title, particularly the word souls, was crucial. It seemed evident that Du Bois was trying to write about something deeper than just lived reality; he wanted to write about the souls of African Americans, the parts of them that could connect with the divine. And this title stood in direct opposition to white supremacist arguments of the time that black people did not have souls.

BB: In chapter 3 (and Reforging) you answer your own call to examine the religious dimensions of the construction of whiteness. In this chapter you show how Du Bois understood white supremacy in theological terms, and where and why this theology had dire economic consequences. You also make a key point here about Du Bois’s relationship to Marxism, since by definition orthodox Marxism has no room for religion. I wonder if you could elaborate on this point, or perhaps connect this question to the question below about chapter 4?

EB: Du Bois was certainly influenced by Karl Marx in the early twentieth century. He was also deeply moved by the Communist experiments in the Soviet Union and China. This has often been used to suggest that Du Bois was anti-religious, as much of the Communist experiments were. But Du Bois was never a dogmatic reader. He did not follow everything that Marx or Lenin or Mao wrote. Du Bois took from them what he thought applicable and left what he found incidental. For instance, Marx’s comments about religion are not really central to his political aims. What Du Bois wanted was an organized economy. He wanted the best and brightest minds to come together and plan the economy – so that if people were starving, they could be sent food; if people were homeless, they could be built homes; if people needed jobs, they could found. This is what socialism meant to Du Bois. The question, then, becomes from where does this spirit of change come. Du Bois had no problem arguing that a true interpretation of religion and Christianity would lead people to this kind of political economy. So Du Bois was a religious socialist, and this was very common in the United States.

On the issue of whiteness, I think it is critical that we recognize, as Du Bois did, the importance of religious ideas for it. Being “white” in the United States is more than just having greater access to wealth or more opportunities in education; it is a subtle, psychological connection to the sacred, to God. There is a reason that Jesus and the biblical heroes are almost always depicted as white in American culture. Heck, even Simon the Cyrene is not black in Mel Gibson’s The Passion of the Christ. [BB: Read this book and this commentary for works that address, to some extent, race and Gibson's movie, and watch this for a direct challenge to a white, European Jesus. See my brief reflections about Color of the Cross here and here. Also relevant is Callahan's The Talking Book. See my thoughts here. Finally, check this out.] By associating whiteness with godliness, American society can accept slavery, segregation, high incarceration rates of African Americans, etc. For Du Bois, the only way we could overcome this connection was to first be aware of it and then chose to dismantle it. That is why I write so much about the connection between whiteness and godliness.

BB: In your chapter on literature, violence, and redemption (ch. 4), you intriguingly explore Du Bois’s literary productions and the deft ways he dramatizes violence using religious categories. In these stories Du Bois’s reverses the status quo of the time and therefore seemingly reflects a kind of redemptive hope. On this account, what are 2 or 3 of Du Bois’s most important creative, literary works and why?

EB: The best place to start for Du Bois’s stories of violence and religion would be in Darkwater. There, he has a short story entitled “Jesus Christ in Texas.” It’s just marvelous. Basically, it asks what would happen if a Jewish Jesus showed up in 1915 in Waco, Texas. Also in Darkwater there are some poems that are great to read: “A Litany at Atlanta” is powerful and so is “The Gospel According to Mary Brown.” [BB: See also the powerful "The Souls of White Folk."] Only the truly committed should delve into Du Bois’s novels. They can be a little boring at times.

BB: To what extent are these creative writings applicable, or instructive, for contemporary American society? In your experience, do students seem to make these sorts of connections?

EB: Du Bois always depicted issues of race and racism, international warfare and imperialism, and material greed and graft as moral issues. He saw religion as intimately connected to discrimination, to national wars, and to business abuses. Basically, Du Bois claimed that the religion of a people either impels it to justice or away from it. His attacks upon imperialism, for example, could be heard today in terms of the war in Iraq. This is the reason I began the book with this prayer from him: “Give us in our day, O God, to see the fulfillment of Thy vision of Peace. May these young people grow to despise false ideals of conquest and empire and all the tinsel of war. May we strive to replace force with justice and armies of murder with armies of relief. May we believe in Peace among all nations as a present practical creed and count love for our country as love and not hate for our fellow men. Amen.”

My students very easily make the connections between what Du Bois said then and what we live in now. They see the link between past white claims that African Americans did not have souls with the current focus on white children when they are kidnapped (and the lack of attention to black children). They also see how materialism – buying more and more stuff – does not fuel one spiritually, a point that Du Bois made over and over again.

BB: From your discussion of Du Bois’s relationship to Communism (ch. 5), in many ways he appears more religious in the later years of his life, particularly leading up to his move to Ghana and after he became a member of the Party. Why is this the case?

EB: The conventional wisdom on Du Bois is that in his later years he really abandoned religion. But if you read any of his poems, any of his political speeches, or his final autobiography, it appears evident that religious ideas were on his mind just about all the time. I think, in part, he was responding to the hyper-Christian nationalism that emerged after WWII in the United States that painted everything American as godly and everything socialistic as evil. Du Bois tried to fight fire with fire, but he was certainly in the minority. This should not, however, make us see him as antireligious. He was anti the particular brand of American religion after WWII, the kind that wrapped itself in the American flag, in McCarthyism, in militancy, and in materialism.
[Photo from UMass Digital Archive; Du Bois in Moscow, ca. 1958)
Posted by Phil at 9:36 AM

Blum makes a real contribution to whiteness studies in chapter 3 (and _Reforging_), as he argues Du Bois was one of the forerunners of critical race theory. Religion is vitally important to the construction of whiteness in the United States, and this is an angle ripe for scholarly exploration. Whiteness studies scholars haven't dealt fully with the religious dimensions of race construction.

Any additional thoughts, or works to suggest?