Protest and Propaganda: W. E. B. Du Bois, The Crisis, and American History

I announce a forthcoming book, due out around November 1, co-edited with UNC Wilmington art historian Amy Helene Kirschke. 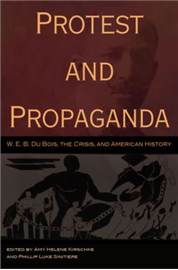 The book began as a conference panel at the American Historical Association annual meeting in San Diego in 2010, and evolved into the first ever volume that looks at the history of NAACP's The Crisis magazine and its relationship to W. E. B. Du Bois and 20th century American history.

Here's a description of the volume from the University of Missouri Press book page:


In looking back on his editorship of Crisis magazine, W. E. B. Du Bois said, “We condensed more news about Negroes and their problems in a month than most colored papers before this had published in a year.” Since its founding by Du Bois in 1910, Crisis has been the primary published voice of the NAACP. Born in an age of Jim Crow racism, often strapped for funds, the magazine struggled and endured, all the while providing a forum for people of color to document their inherent dignity and proclaim their definitive worth as human beings.

As the magazine’s editor from 1910 until 1934, Du Bois guided the content and the aim of Crisis with a decisive hand. He ensured that each issue argued for civil rights, economic justice, and social equality, always framing America’s intractable color line in an international perspective. Du Bois benefited from a deep pool of black literary and artistic genius, whether by commissioning the visual creativity of Harlem Renaissance artists for Crisis covers or by publishing poems and short stories from New Negro writers. From North to South, from East to West, and even reaching across the globe, Crisis circulated its ideas and marshaled its impact far and wide.

Building on the solid foundation Du Bois laid, subsequent editors and contributors covered issues vital to communities of color, such as access to resources during the New Deal era, educational opportunities related to the historic Brown decision, the realization of basic civil rights at midcentury, American aid to Africa and Caribbean nations, and the persistent economic inequalities of today’s global era.

Despite its importance, little has been written about the historical and cultural significance of this seminal magazine. By exploring how Crisis responded to critical issues, the essays in Protest and Propaganda provide the first well-rounded, in-depth look at the magazine's role and influence. The authors show how the essays, columns, and visuals published in Crisis changed conversations, perceptions, and even laws in the United States, thereby calling a fractured nation to more fully live up to its democratic creed. They explain how the magazine survived tremendous odds, document how the voices of justice rose above the clamor of injustice, and demonstrate how relevant such literary, journalistic, and artistic postures remain in a twenty-first-century world still in crisis.

Amy and I are very pleased to collaborate with some noted scholars, including UH's Gerald Horne, a former prof of mine, historian of African American culture Shawn Leigh Alexander, and political scientist Bob Williams, who runs the fantastic WEBDuBois.org web site.

Here's the table of contents:


The Crisis: A Record of the Darker Races: An Introduction, Shawn Leigh Alexander


Chapter 1: W. E. B. Du Bois and Positive Propaganda: A Philosophical Prelude to His Editorship of The Crisis, Robert W. Williams

This is great information. I will be placing my order. I do recall that panel, though I was unable to attend the meeting. I am most excited about this work.