A Hot Topic: Spending the Summer with W.E.B. Du Bois 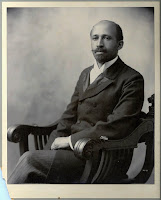 This post announces a series of reflections on Ed Blum’s new book titled W.E.B. Du Bois: American Prophet. A companion series will examine some of Du Bois’s prayers. In addition to commentary on Blum’s book, I’m happy to report Ed will appear in a few weeks in the form of an interview here at bald blogging. (See another interview with Ed here.)

(Interested readers may also want to pick up Phil Zuckerman’s wonderful compilation of Du Bois’s religious writings, Du Bois on Religion. It is a must read.)

In Manning Marable’s Living History: How Reimagining the African-American Past Can Remake America’s Racial Future (2006), he writes about “Resurrecting the Radical Du Bois” (ch. 3). Marable’s stellar book prompts readers to resurrect Du Bois’s “revolutionary and radical politics” (111), and in particular Du Bois’s relationship with and to Marxism in the U.S. and Europe. Revolutionary politics, of course, involves a trenchant critique of “structural racism,” (113) across the globe. Marable also suggests anew studies of Du Bois in light of feminist scholarship as well as analyses of the aesthetic sensibilities that appear in his work.

Marable’s choice of the word “resurrection” to call for a study of Du Bois with new eyes ironically overlooks religion altogether. What Marable overlooks, Blum centers, and the result is a fascinatingly stunning look at an American prophet.

Blum’s work uncovers multiple religious selves in Du Bois, and charts the evolution of his relationship to faith, spirituality, and Christianity. Blum canvasses Du Bois’s corpus, and thematically investigates The Souls of Black Folk, Du Bois’s sociology of religion, his understanding of Christianity and Communism, the uses of religion in Du Bois’s creative work, and the reception of the spiritual Du Bois.

Blum’s writing is clear and lucid, and his ability to craft poetic statements that summarize and/or explain is something to emulation. Here’s an example: “What emerges from Du Bois’s imagination is a riveting tale where angels masqueraded as teachers, where demons cloaked themselves as moderates, where economic policies had spiritual outcomes, where prophets postured as professors, and where the seemingly irreligious Du Bois [according to previous biographers] was the nation’s holy seer” (8). And another: “It is the spiritual side, the soulfulness of his life and the religious power of his prose and personality that this book seeks to unveil” (10). Readers familiar with Du Bois will notice the interesting use of terms here.

It is also worth mentioning Blum’s personal reflections on Du Bois in the Acknowledgements section of the book. “I wrote this book as an acolyte,” Blum writes, “imagining myself sitting at Du Bois’s feet, reading over his shoulder, and listening to the responses of the many he touch. I wrote this book to learn religion and spirituality from Du Bois….I prayed his prayers to my students and endeavored to feel his moving in their hearts” (273). Such a personal revelation offers helpful perspective, and it is not too much to say that one feels Blum’s deep engagement with Du Bois on nearly every page. The Professor still teaches. And if Blum learned from Du Bois, then we can listen to and learn from him too, and with Blum, understand, embrace, and enact the ways Du Bois prompted people to make the world a more peaceful, just, and equitable place to live.
Posted by Phil at 10:59 PM

Great choice for book blogging -- I look forward to more. I'll put up a link to it.

Paul, thanks for the kind words and for the shout out at your blog. I've read your work, and assigned several readings from the Columbia reader for my American Religious History students this summer. I look forward to yours and Ed's book on Jesus. LK, thanks for stopping by and we'll have to catch up soon about your research excursions. Peace, Phil