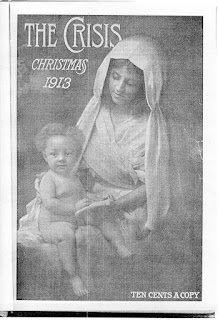 Yesterday I drove about 90 minutes to my alma mater, Sam Houston State University. I gave a talk at the history department's symposium to commemorate the centennial of the NAACP, sharing some of my research on W.E.B. Du Bois The Crisis (as mentioned in a previous post).

Harlem Renaissance scholar Cary Wintz as well as Texas Southern University historian Howard Beeth delivered talks. Howard's paper dealt with early twentieth century African American newspaper editor C.F. Richardson and Cary's presentation covered the life and work of the indefatigable Charles Hamilton Houston. The papers complimented each other beautifully as we saw the history of legal challenges to segregation, the work of the black press in Houston to criticize Jim Crow, and literary efforts to assert Black identity. The Q&A following the talks was quite good and discussion rich. Kudos to my mentor and friend Bernie Pruitt for her efforts to organize the symposium. 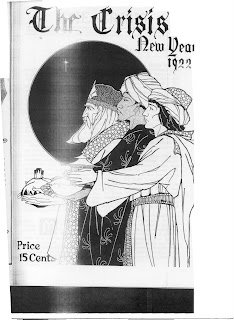 A number of students attended the talk, as well as several faculty members from history and other departments. It was a great joy to be back on campus, see old friends, and meet new folks. We all had a wonderful dinner afterward, and heard some amazing and moving stories about the Civil Rights Movement in Huntsville.

I speak again in Huntsville on Sunday at Greater Zion Missionary Baptist Church as part of a local program commemorating the efforts of local civil rights leaders. Thanks again to Bernie for her efforts organizing this program.
The images that accompany this post are religiously-themed covers from The Crisis magazine. These images were part of my presentation. The image on the left features a Black Madonna with Black Christ child, and this issue contained a spiritual short story titled "Three Wise Men." The image on the right depicts the Three Wise Men (one Black) from the Christmas passage in Luke.
Posted by Phil at 6:53 PM