[This is also posted over at Religion in American History.]

Today I received in the mail the much anticipated The Souls of W.E.B. Du Bois: New Essays and Reflections. It was well worth the wait. While I have not yet read every essay, I poured through many of them and want to highlight several points about this seminal collection.

First, kudos to Ed Blum and Jason R. Young. This is a stout collection of essays that unveils a spiritual Du Bois who—as we all know from Ed’s work was an American prophet—but from the new work also a scholar whose interest in things spiritual included commentary on the history of Islam, writing about Zionism, and reflections on the religious traditions of India.

The editors organized the essays into four segments: the first around the question of Du Bois’s religious inspiration, a section that analyzes Souls of Black Folk, another on the social and cultural history of Du Bois and religion, and a final section on Du Bois’s engagement with Islam, Judaism, and Buddhism. 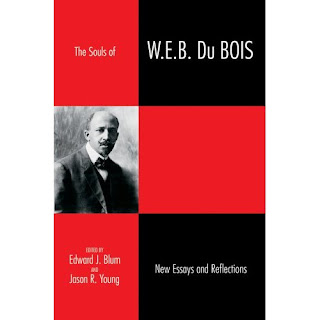 In section one readers will find a revised version of Dwight Hopkins’s chapter on Du Bois from his great book on Black theology titled Shoes That Fit Our Feet, and an interesting essay on the (religious) pragmatist tradition of Du Bois—an important topic that Jonathon Kahn will expound upon in Divine Discontent: The Religious Imagination of W.E.B. Du Bois, due out in July. Most importantly, Phil Zuckerman adds a keen challenge to Du Bois as a religious figure and claims he was decidedly “irreligious.” Zuckerman piles the quotes and the evidence quite high, and makes good points about Du Bois’s social scientific worldview as well as his extreme distaste for religious hypocrisy. Although I am not fully persuaded by his claims, Zuckerman nevertheless remains a very thoughtful voice in the growing body of work about Du Bois and religion.

The second section on Souls of Black Folk adds yet more texture to the multiple studies of this key work. So far my favorite part of the collection is section three. Ed’s contribution here comes from ch. 4 of W.E.B. Du Bois, American Prophet, one of the strongest chapters of his biography. (For more on this chapter see this post from my interview with Ed.) David Howard-Pitney’s essay ties Du Bois’s religious meditations to America’s civil religion and therefore contextualizes his work in new ways. Another very strong contribution in this section comes from Michelle Kuhl, whose essay studies Du Bois’s conception of manhood as reflected in his lynching/crucifixion tales published in The Crisis. Here Kuhl makes use of some of Du Bois’s understudied writing while editor of the NAACP’s magazine, and shows that Du Bois’s fictional work and creative writing is crucial for understanding his overall religious outlook.

The final segment of this collection takes Du Bois and religion in an entirely new direction by focusing on his understanding of Islam (Jason R. Young), his relationship to Zionism (Benjamin Sevitch), and the literary and religious depth of Du Bois’s Darkwater and Dark Princess (Ronda C. Henry).

Put this on your to-be-read list. It will be well worth your time. Here's what others have to say (from the jacket). James Cone describes this new book as "a thoughtful collection of essays," and Anthea Butler writes that it is an "excellent volume." Manning Marable says that the book contains "fresh insights" and "extraordinary essays." Finally, the BlogMeister recommends the essays as "wonderfully interesting" as the volume is "unusually coherent and cohesive."
Posted by Phil at 10:44 PM