My friend and colleage Jonathan Walton, assistant professor of Religious Studies at the University of California, Riverside, has a book coming out in February with the fine folks from NYU Press. It's called Watch This! The Ethics and Aesthetics of Black Televangelism. (And speaking of NYU Press, check out their new blog, "From the Square.")

Through their constant television broadcasts, mass video distributions, and printed publications, African American religious broadcasters have a seemingly ubiquitous presence in popular culture. They are on par with popular entertainers and athletes in the African American community as cultural icons even as they are criticized by others for taking advantage of the devout in order to subsidize their lavish lifestyles.

For these reasons questions abound. Do televangelists proclaim the message of the gospel or a message of greed? Do they represent the “authentic” voice of the black church or the Christian Right in blackface? Does the phenomenon reflect orthodox “Christianity” or ethnocentric “Americaninity” wrapped in religious language? 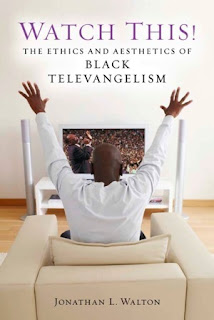 Watch This! seeks to move beyond such polarizing debates by critically delving into the dominant messages and aesthetic styles of African American televangelists and evaluating their ethical implications.

With an early focus on Rev. Ike and initial versions of the prosperity message, Walton places the contemporary phenomenon of black religious broadcasting in historical perspective, demonstrating that the types of syncretic and sensational black Christian practices witnessed on today's airwaves have been brewing within African American storefronts and on black religious radio for the majority of the twentieth century. He goes on to illumine the diversity of theology and social thought among popular black religious broadcasters in order to delineate the differences among figures often lumped together as monolithic.

In so doing, Watch This! provides a principled ethical analysis that situates televangelists against a larger cultural backdrop, evaluating them according to their own self-understandings and ecclesial agendas. From T.D. Jakes to Bishop Eddie Long to Pastor Creflo Dollar, Walton argues that despite their emphasis on social and economic advancement in the African American community, these leaders ministries frustrate their own liberatory aims and unwittingly reinforce class, racial, and gender injustices in America.

Such a nuanced examination of black religious broadcasting is certain to enrich our understanding of this prevalent and pervasive form of popular and political culture.
Posted by Phil at 9:12 PM

Phil, thanks for sharing. I'm intrigued and I will be purchasing a copy right away. I'm also intrigued by Walton. I'll be sure to check out his blog tonight.

Just out of curiosity, is there any overlap in Watch This! and Holy Mavericks?

I am with Nathan on his question.

There is definately some overlap with Jonathan's work and _Holy Mavericks_ insofar as we study the trappings, complexities, and contradictions of celebrity religion and celebrity religious figures.

But Jonathan examines more fully the history and the politics of performance among leading black televangelists (at least that's what his dissertation did, on which the book is based). And he did a magnificent job on it, I might add, so I would expect the same from the book.

Also, Shayne's a sociologist, I'm a historian, and Jonathan's a religious studies scholar, so the perspectives that inform our disciplines distinguish our work, even though we all cross disciplinary boundaries in what we do.