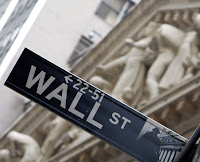 Thinking and hearing about the latest news from Wall Street reminded me of some of what W.E.B. Du Bois wrote many, many years ago.

Published in 1935, the year after Du Bois left the NAACP, these paragraphs from Black Reconstruction in America read like many of the creative religious parables and moralistic news stories he wrote while editor of The Crisis. (Read more about this book here; HT: The Proletarian.) And if Du Bois is an American prophet, then these words about religion, commerce, and global capitalism have a certain resonance with recent events. I’m not sure that history repeats itself—the human past and human experience are far too complex—but a wise person once wrote that there is nothing new under the sun. Du Bois, it is safe to say, certainly had an inkling of both.
Anyway, food for thought. 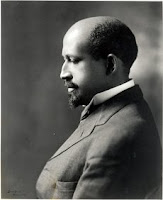 Suppose on some gray day, as you plod down Wall Street, you should see God sitting on the Treasury steps, in His Glory, with the thunders curved about him? Suppose on Michigan Avenue, between the lakes and hills of stone, and in the midst of hastening automobiles and jostling crowds, suddenly you see living and walking toward you, the Christ, with sorrow and sunshine in his face? Foolish talk, all of this you say, of course; and that is because no American now believes in his religion. Its facts are mere symbolism; its revelation vague generalities; its ethics a matter of carefully balanced gain….God wept; but that mattered little to an unbelieving age; what mattered most was that the world wept and still is weeping and blind with tears and blood…[T]he immense profit from this new exploitation and world-wide commerce enabled a guild of millionaires to engage the greatest engineers, the wisest men of science, as well as pay high wage to the more intelligent labor and a the same time to have left enough surplus to make more thorough the dictatorship of capital over the state and over the popular vote, not only in Europe and America, but in Asia and Africa. The world wept because within the exploiting group of New World masters, greed and jealousy became so fierce that they fought for trade and markets and materials and slaves all over the world until at last in 1914 the world flamed in war. The fantastic structure fell, leaving grotesque Profits and Poverty, Plenty and Starvation, Empire and Democracy, staring at each other across the World Depression. And the rebuilding, whether it comes now or a century later, will and must go back to the basic principles of Reconstruction in the United States during 1867-1876—Land, Light and Leading for slaves black, brown, yellow and white, under a dictatorship of the proletariat (pp. 123-24; 634-35).
Posted by Phil at 11:00 AM

He was prophetic, that is for sure. And in so many ways.