I'd like to announce another book of mine that's coming out this fall, co-edited with Indiana Wesleyan University history professor Rusty Hawkins.  Published by Oxford University Press, it is titled Christians and the Color Line: Race and Religion after Divided by Faith. 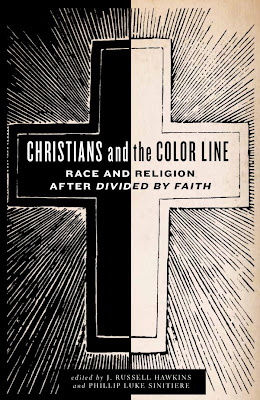 Rusty and I co-edited essays that came out of the 2010 anniversary conference Rusty organized at Indiana Wesleyan on Michael Emerson and Christian Smith's book Divided by Faith: Evangelical Religion and the Problem of Race in America (Oxford University Press, 2000). Read my posts about the conference here and here. Rusty is also part of the Indiana Wesleyan University President's Author Series this fall where he'll discuss the book.


Christians and the Color Line analyzes the complex entanglement of race and religion in the United States. Drawing on historical and contemporary examples of racialized religion, the essays in this volume consider the problem of race both in Christian congregations and in American society as a whole.