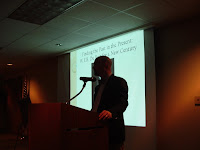 On Saturday evening I had the privilege of delivering the Brotherhood/Sisterhood Conference banquet address for the NAACP student chapter (Unit 6816) on the campus of Sam Houston State University. I gave a talk titled "Finding the Past in the Present: W.E.B. Du Bois for a New Century." 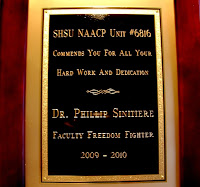 I was also honored with the
2009-2010 Faculty Freedom Fighter Award, recognizing the
role of teaching and scholarship in keeping the memory of the
NAACP alive and continuing its work for civil and human rights
in the 21st century. I am particularly excited to win this award during the 2009-2010 academic year, months that span the centennial of the association itself and The Crisis magazine. The SHSU chapter is doing great work on campus and in the greater Huntsville and Houston communities, in addition to playing key roles at the national level. I'm humbled to be associated with chapter, and excited to be a part of the work the students are doing.
Posted by Phil at 11:55 AM