I'm pleased to report that my book Holy Mavericks: Evangelical Innovators and the Spiritual Marketplace (co-authored with Shayne Lee) is out today.

You can view the Table of Contents and the Introduction. Purchase a copy here.


Here’s a description of the book from the NYU Press website:

Joel Osteen, Paula White, T. D. Jakes, Rick Warren, and Brian McLaren pastor some the largest churches in the nation, lead vast spiritual networks, write best-selling books, and are among the most influential preachers in American Protestantism today. Spurred by the phenomenal appeal of these religious innovators, sociologist Shayne Lee and historian Phillip Luke Sinitiere investigate how they operate and how their style of religious expression fits into America’s cultural landscape. Drawing from the theory of religious economy, the authors offer new perspectives on evangelical leadership and key insights into why some religious movements thrive while others decline. 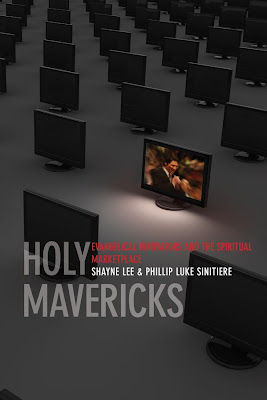 Holy Mavericks provides a useful overview of contemporary evangelicalism while emphasizing the importance of “supply-side thinking” in understanding shifts in American religion. It reveals how the Christian world hosts a culture of celebrity very similar to the secular realm, particularly in terms of marketing, branding, and publicity. Holy Mavericks reaffirms that religion is always in conversation with the larger society in which it is embedded, and that it is imperative to understand how those religious suppliers who are able to change with the times will outlast those who are not.


Here’s what others have said:

“Introduces us to some of the most prominent religious innovators in the United States today—savvy spiritual suppliers,’ as the authors say—who are skilled at recalibrating their messages and ministries to fit particular audiences. Religious scholars will welcome the attention given to cultural themes in the analysis, and the emphasis on more than just individual choice; general readers will be enthralled by the creativity of the producers but also appalled at the captivity of religious faith to contemporary culture.”
Wade Clark Roof, University of California at Santa Barbara

“A fascinating journey into the worlds of five of the most influential religious leaders in the United States. Holy Mavericks provides an open window to view change both in American religion and American culture. In reading this book, you will find that these five religious giants do not practice old time religion, and yet, ironically, they do. Holy Mavericks shows us how.”
Michael O. Emerson, Rice University

“Takes us beyond the scandal-mongering and speculation so common in popular media coverage of religion to provide a deeper level of insight into some of the most influential ministries in the spiritual marketplace of American religion today. Combining keen sociological analysis with crucial historical contextualization, Lee and Sinitiere explain what have been the keys to the relative successes of these ministries' leaders as individuals willing to do business’ outside of traditional ministerial boundaries in a variety of ways. . . . A must-read for those seeking to understand this intersection of faith, commerce, and politics.”
Milmon F. Harrison, University of California at Davis
Posted by Phil at 3:36 PM

Can't wait to read it!

Congratulations! I need to get a copy.
Lou

Thanks, JazzTheo. Look forward to reading your new book too!

Lauran, I sure hope it is an instant classic! Thanks, deg. Hope all is well in Athens. Thanks, Lou. Look forward to learning more about your ministry.