Of Politicians, Pastors, and Prayer 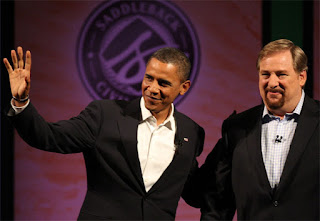 Here's a piece Shayne Lee and I wrote about Rick Warren, Barack Obama, and the inaugural prayer. It relates to some of the ideas behind contemporary Protestant evangelical religious leadership and American culture, which we detail in our forthcoming Holy Mavericks: Evangelical Innovators and the Spiritual Marketplace (NYU Press).

It is crossposted at From the Square, NYU Press's blog and Religion in American History.

E.J. Dionne’s New Republic column, for example, titled “Big Tent,” (HT: John Fea) a thoughtful analysis of the Obama-Warren issue, reports that some wonder to what extent Obama has betrayed his liberal politics, while others embrace Obama’s decision and call for a more enlightened liberal politics. Christianity Today, the leading magazine of evangelical thought and culture, features some writers who are asking if Warren is the next Graham, or if he’s transcended the aged leader’s stature. Another voice of the religious right, Steve Brody’s blog at the Christian Broadcasting Network, “The Brody File,” (HT: Get Religion) features e-lamentations about Warren’s decision to pray at the inauguration. Alan Wolfe’s New Republic piece “Obama’s New Pastor Problem?,” (HT: John Fea) offers further contextualization about Warren and the religious right. And corroborating Steve Brody’s blog, Rachel Zoll’s article points out that some of Warren’s toughest critics are those on the religious right. Sociologist Gerardo Marti offers a brief history of Warren his Southern California context, what he calls “Warren-ology.” Religious studies scholar Anthony Pinn provides precise analysis of theology, political compromise, and the presidency, and historian of religion Anthea Butler contends that president-elect Obama misgauges Americans’ religious convictions.

Obama’s choice of Warren to pray at the inauguration—and in particular the range of responses this choice has elicited—gives us occasion to reflect on Protestant evangelical religious leaders we call “holy mavericks,” five of whom we discuss and analyze in our forthcoming Holy Mavericks: Evangelical Innovators and the Spiritual Marketplace, due out in April with NYU Press.

We contend that Rick Warren is a holy maverick. Simply put, a holy maverick is an enterprising religious leader who crafts his or her ministry to a particular niche (or niches) in the spiritual marketplace. Holy mavericks are talented and savvy spiritual suppliers we call innovators, efficiently successful at recalibrating their messages and ministries toward the existential needs and tastes of church-going America. Houston minister Joel Osteen, for example, effectively marketed messages and books titled Your Best Life Now (2004) and Become a Better You (2007). Osteen’s brand of self-help spirituality reaches millions, and gains new followers each day.

Holy mavericks can be a fascination to the general public, and command wide audiences with messages of purpose, empowerment, and uplift. Rick Warren, for instance, took his purpose driven message to professional sporting events, political meetings, and to pastors in Africa. He also recently addressed the Muslim Public Affairs Convention in southern California. Holy mavericks can also exist as a thorn in the flesh of gatekeepers of church traditions who chide innovators for casting wide nets and polluting the gospel with “watered-down” versions of Christianity. Holy mavericks can elicit both intense loyalty and venomous contempt from clerical peers and congregants.

Another distinguishing mark of a holy maverick is his or her ability to sense how historical moments and opportunity structures shape their messages and marketability and help to bring their individual initiatives to fruition. Holy mavericks possess social, cultural, and spiritual dexterity. Put another way, holy mavericks are brilliant at surfing spiritual waves, a practice in which spiritual leaders discern where God is moving in one’s cultural milieu, and then prepare their churches and themselves to cooperate with the movement. Here’s Rick Warren: “Three key responsibilities of every pastor are to discern where God’s spirit is moving in our culture and time, prepare your congregation for that movement, and cooperate with it to reach people Jesus died for. I call it ‘surfing spiritual waves.’”

Warren knows that of which he speaks. Consider these snapshots from his recent activities: not many other preachers are friends with the president of Rwanda, write a monthly column for Ladies Home Journal, and receive a standing ovation after speaking at Harvard University. Not many other conservative pastors possess the flexibility to be pro-life and pro-poor, the ingenuity to lead a preaching seminar for rabbis at the University of Judaism, or the versatility to work and dine with homosexual activists while maintaining a firm stance against same-sex marriage. Not many spiritual leaders mentor prominent businesspersons like Rupert Murdock and Jack Welch, or can claim that after three decades of ministry, they have never been alone in a room with a woman other than their wife. Few evangelical pastors are friends with both President George W. Bush and Democratic president-elect Barack Obama, a notable participant at Warren’s 2006 Global Summit on AIDS and the recent Presidential Forum, both at Saddleback Church. And Warren’s latest book, The Purpose of Christmas, adds further insight into the complexity of this holy maverick’s cosmopolitan outlook. It continues to articulate the readable simplicity of the purpose-driven message and hit the major points of conservative evangelical theology (e.g., centrality of Jesus, authority of Bible, etc.). Yet with a closing chapter on Warren’s P.E.A.C.E. plan, it registers as decidedly cosmopolitan in outlook and activist in tone.

So if Rick Warren is accustomed to surfing spiritual waves, and if Obama is serious about working across political lines as he embraces the change he promised, then Warren accepting Obama’s invitation to give the inaugural prayer is neither out of character nor a simple, shrill political move. It is a holy maverick at work.

If Warren is serious about working for social, political, and economic change through his P.E.A.C.E. plan and if Obama is serious about embodying change in today’s combative and partisan political order, and if these two visionaries will work together—at least for a day—then perhaps history will observe that the real mavericks of the 2008 Presidential election cycle were not, in fact, John McCain and Sarah Palin, but Barack Obama and Rick Warren. Why? In the midst of differences, each appears willing to find common ground in order to work together. Perhaps we all have something to learn from pastors and politicians after all.
Posted by Phil at 9:53 AM