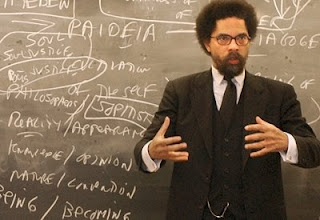 A few weeks back while browsing the stacks at UH's M.D. Anderson Library, I came across a new book on Cornel West and writing--literally the composition of text. I'm still contemplating how I will incorporate this into my history classes and pondering deeply about West's influence on my own writing and research agenda, but at the very least this book provides food for thought, and hope for the future.

Composition and Cornel West: Notes toward a Deep Democracy identifies and explains key aspects of the work of Cornel West—the highly regarded scholar of religion, philosophy, and African American studies—as they relate to composition studies, focusing especially on three rhetorical strategies that West suggests we use in our questioning lives as scholars, teachers, students, and citizens.

In this study, author Keith Gilyard examines the strategies of Socratic Commitment (a relentless examination of received wisdom), Prophetic Witness (an abiding concern with justice and the plight of the oppressed), and Tragicomic Hope (a keep-on-pushing sensibility reflective of the African American freedom struggle). Together, these rhetorical strategies comprise an updated form of cultural criticism that West calls prophetic pragmatism.

This volume, which contains the only interview in which Cornel West directly addresses the field of composition,sketches the development of Cornel West’s theories of philosophy, political science, religion, and cultural studies and restates the link between Deweyan notions of critical intelligence and the notion of critical literacy developed by Ann Berthoff, Ira Shor, and Henry Giroux. Gilyard provides examples from the classroom to illustrate the possibilities of Socratic Commitment as part of composition pedagogy, shows the alignment of Prophetic Witness with traditional aims of critical composition, and in his chapter on Tragicomic Hope, addresses African American expressive culture with an emphasis on music and artists such as Curtis Mayfield, Marvin Gaye, Aretha Franklin, and Kanye West.

The first book to comprehensively connect the ideas of one of America's premier scholars of religion, philosophy and African American studies with composition theory and pedagogy, Composition and Cornel West will be valuable to scholars, teachers, and students interested in race, class, critical literacy, and the teaching of writing.
Posted by Phil at 11:22 PM

He seems like a very intreging person that I really don't know much about. I'll have to do more reading about him when I'm done with what I'm trying to cover now.

West is a must read, no doubt about it. In so many ways, I think, he is one of the folks carrying Du Bois's legacy to the
21st century. I look forward to talking more about West with you.