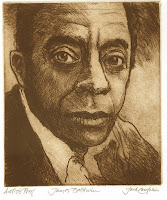 As this time of year is the season of birth(s) and beginnings, what some call Advent, or an all-out capitalist bonanza at the store of your choice, it is also a time to remember a death--the 20-year commemoration of the passing of James Baldwin.

Readers of this blog are already aware of my affection for St. James.

Democracy Now recently devoted part of a show to Baldwin's legacy, interviewing his sister-in-law Carole Weinstein as well as actor Calvin Levels, who is performing a one-man-show of James Baldwin called "James Baldwin: Down From the Mountaintop." Hopefully it will come to Houston. (Read a review here.)

As I reflect on the life of St. James, particularly during the Advent season, I'm drawn to the hope--critical, exacting, honest, and yes, prophetic--resident in Baldwin's writing, his plays, his speaking, and above all the hope evidenced by his living. And, in a sense, Baldwin's words, whether written or spoken, seem to never return void.

So take time during the holiday season to read something of Jimmy's--The Fire Next Time, Another Country, Nobody Knows My Name, or anything else that comes to mind. Share your reflections and thoughts--gift someone with Baldwin during the holidays.

Or, you can following Baldwin on-line. Watch a C-SPAN special here. Visit the blog of Professor Zero who has a page of Baldwin links. For those more familiar with Baldwin's work, there's tons to read here, or here. Or, read Baldwin quotes with links to other great sites.

This is Advent with St. James.

If it came to Houston, I could go.

Great post! I thought he was mentioned in that book "Scarlet Professor" but I am wrong.

...again, let me add William Banks' book "Black Intellectuals." He adds a very nice discussion to the nature and impact of intellectuals such as Baldein; however, like many works, he does limit his treatment some of Baldwin.

Cero, we'll watch the schedule to see if Baldwin comes to Houston. Thanks for the lead, Eddie; I'll check it out.

I wonder if Baldwin would be considered a public intellectual, in the contemporary usage of the phrase?