No Holiday for the Spiritual Marketplace: Religious Celebrities in H-Town 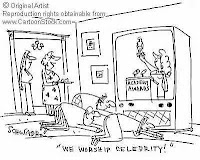 The elevation of Houston Archbishop Daniel DiNardo to the position of Cardinal this weekend has me thinking of religious celebrities.

CBS affiliate KHOU has a newstory here that features an interview with DiNardo's sister, a Houston resident. See DiNardo's Houston-Galveston Archdiocese bio here, newstories from Pittsburgh, the priest's old stomping grounds (read here also). Houston Chronicle religion reporter Tara Dooley blogs about DiNardo here, and writes about DiNardo here.
Some of my current research deals broadly with this topic, and it is interesting to note that Houston--the nation's 4th largest city--is quickly becoming a haven for religious celebrities. If we consider Texas more broadly--we might as well call it the Lone Star Spiritual Marketplace. Perhaps I'll compose another blogpost on the state later on, but in the meantime read Roy Spence's The Amazing Faith of Texas. Check out the book's website here.
If you know Houston, the first religious celebrity that comes to mind is probably Joel Osteen. There are other Protestant and Catholic religious celebrities, as well as prominent folks from other faith traditions.
These figures may or may not embrace the title "religious celebrity," but today's hyper-capitalist society influences and informs the performative aspects of just about everything. Plus, the separation of church and state, dating back to the 1790s, first created the possibility for a religious or spiritual marketplace.
Scholars have written about religious celebrity (read about Dr. Phil here, and Mother Theresa here, for example), and one of the people to read on this topic is Kathryn Lofton--whose own work deals with Oprah and spirituality. Read here, here, and here, too.
So, since there's no holiday for America's spiritual marketplace, pardon the pun, feel free to leave your $.02 worth about the topic. Also, who are some other religious celebrities in Houston, or Texas more broadly?
[Photo credit here.]
Posted by Phil at 2:47 PM