Caught in a Webb and Liking It 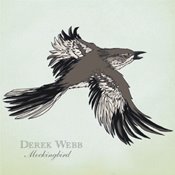 In short, Webb is something of a prophetic voice within evangelical Christianity, and I'd like to offer several comments.

1. In a way, he puts Mark Noll's Scandal of the Evangelical Mind to music in "A New Law." About the wider evangelical world in the United States and its attendant subculture Webb sings:

2. In "A King and a Kingdom" and "Rich Young Ruler" Webb roundly condemns the contradictory politics of many conservative evangelicals, and offers his own take on the matter:

there are two great lies that i’ve heard:
“the day you eat of the fruit of that tree, you will not surely die”
and that Jesus Christ was a white, middle-class republican
and if you wanna be saved you have to learn to be like Him

"Rich Young Ruler"
poverty is so hard to see, when it’s only on your tv and twenty miles across town;
where we’re all living so good, that we moved out of Jesus’ neighborhood;
where he’s hungry and not feeling so good, from going through our trash;
he says, more than just your cash and coin
i want your time, i want your voice
i want the things you just can’t give me....

because what you do to the least of these
my brother’s [sic], you have done it to me
because i want the things you just can’t give me

3. Finally, Webb weighs in on U.S. foreign policy and seems to take aim at George W. Bush in "My Enemies Are Men Like Me":

Interestingly enough, toward the end of this song Martin Luther King's voice emerges, and Webb includes clips from King's 1964 Nobel Prize acceptance speech: "nonviolence is the answer to the moral and poitical questions of our time: the need for man to overcome oppression and violence without resorting to oppression and violence."

4. Webb's Mockingbird is not sophisticated musically, though it is pleasantly simple; it has a rich yet pedestrian quality about it, and possesses the edginess of Donald Miller's Blue Like Jazz; it displays the social consciousness of a Sojourners, and offers a social commentary akin to a Stanley Hauerwas or Brian McLaren (who, by the way, endorse the CD).

hey phil, ben here. our computer totally crashed and we lost everyone's email from over there- do you have anyone's email, like mike and christina, the kratkys, etc. things are interesting over here- i can hook you up with some very cool bloggers from this neck of the woods if you want-